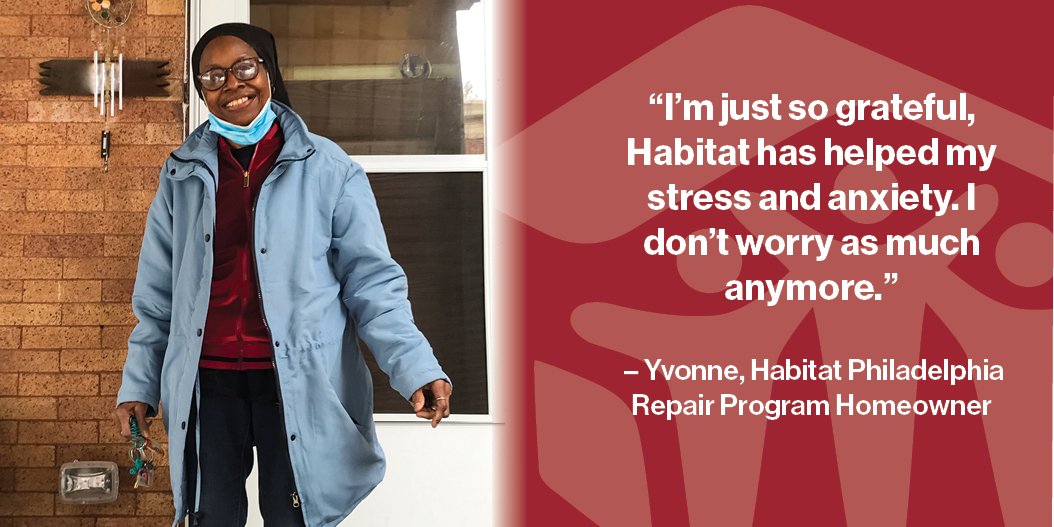 “I would fix one thing and something else would happen,” said Yvonne. “It was like putting tape on something that needed surgery.”

It wasn’t always that way. The home has been in Yvonne’s family since her mother purchased it in the 1980s. Following a 13-year military career where she reached the rank of sergeant, a time she calls one of the best experiences of her life, Yvonne worked in the Philadelphia District Attorney’s office and also served as a police officer. When her mother became ill in 2005, Yvonne moved into the Nicetown home to care for her. After her mother passed away, Yvonne didn’t want to sell her family home, but she knew that the critical repairs needed would be challenging to maintain on her own. Yvonne’s roof over the kitchen leaked when it rained. This made navigating the kitchen difficult and caused her to slip and fall on pieces of the ceiling that had dropped to the floor.

One day, she saw Habitat Philadelphia’s Build Team working at a neighbor’s house. The staff shared information about the repair program and Yvonne called Habitat to learn more.

“I had no idea Habitat did repairs to houses like ours,” said Yvonne referring to her Philadelphia rowhome.

She found that her time spent in the Army qualified her for the Veteran Repair Corps program. She also qualified for Habitat’s CAPABLE program, which provides aging-in place repairs so that homeowners can remain safe and healthy in their home for as long as possible.

Habitat Philadelphia identified the repairs needed to make Yvonne’s home safe, including installing new doors, a renovated kitchen pantry, and new ceiling tiles, but the pandemic halted operations and prevented the team from working in her home while she was there. To ensure that the work could continue safely, Yvonne was invited to stay at the Habitat Guesthouse while the crew completed the repairs on her home.

“I’m just so grateful,” she said. “Habitat has helped my stress and anxiety and I don’t worry as much anymore.”

For Yvonne, these repairs will ensure that her family home remains an asset for her daughter and three grandchildren for years to come.