The History and Effects of Racial Covenants in Philadelphia

A tool used by early 20th century developers, builders and white homeowners; racial covenants prevented African Americans from accessing parts of the residential real estate market across the country. These covenants were obligations put in property deeds that forbade people of color from occupying or owning property.

A recent study from the Federal Reserve Bank of Philadelphia found that between 1920 and 1932, thousands of deeds for Philadelphia homes included racially restrictive covenants and language which barred minorities from buying into or living in certain neighborhoods. Property developers used these racial covenants to prevent African Americans and other minority groups from owning, renting, or residing in homes located in more desirable parts of the city and predominantly white neighborhoods.

From as early as 1911, Real estate advertisements would refer to parts of the city as “restricted sections”, demonstrating that builders were not only imposing restrictions on new homes but were also using them as primary selling points for potential buyers. These restrictions were legal and supported by both developers and real estate agents. 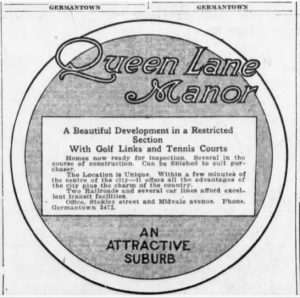 A newspaper clipping from the Sunday Inquirer on September 29, 1915.

This newspaper clipping for “Queen Lane Manor” describes the listed property as “A Beautiful Development in a Restricted Section With Golf Links and Tennis Courts”. This advertisement is a clear example of racially restrictive language used to segregate parts of the city, creating more division between the property is  seen as desirable and attractive for being in a restricted location and for having exclusive amenities not available to people of color.

This clipping titled, “Colored Home Buyers”, is another example which demonstrates the open residential segregation at the time. 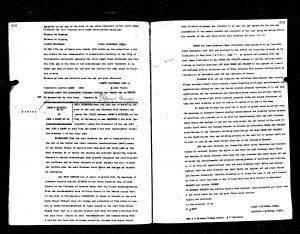 Property deed from 1922 for a property on Chew and Price Streets in Germantown; Source: Larry Santucci (Advisor & Research Fellow, Federal Reserve Bank of Philadelphia) and the Philadelphia Department of Records. 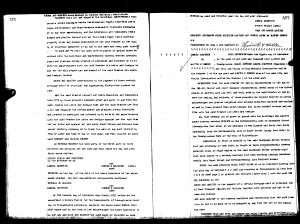 Both property deeds include language which state:

“And also subject to the express condition and restriction that the said premises is not to be sold or occupied by any that are not of the Caucasian race.”

The outward use of racially restrictive language such as this led to a huge disparity in homeownership between white homeowners and people of color in Philadelphia. Today, we recognize these faults in history and work towards closing the gap to build greater equity in our city. Homeownership is a valuable asset and a human right which allows individuals and families to build financial equity, long-lasting generational wealth and a stronger community and city.

Read more about Racial Covenants and how they were used in Philadelphia: