MLK Day in Philly: Your best options for giving back on the national day of service 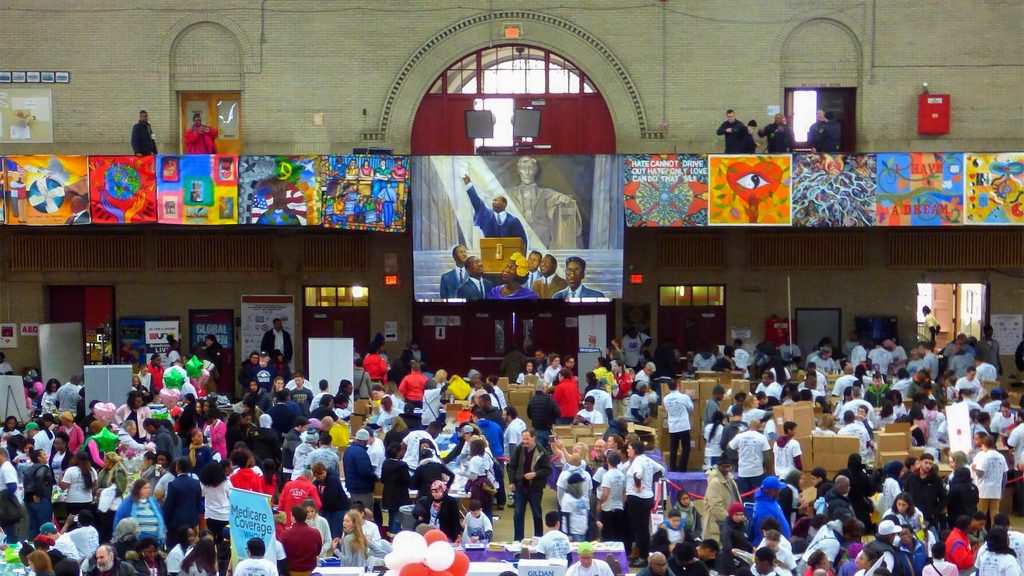 The scene at Girard College on MLK Day 2018

By Layla A. Jones, Billypenn

Think of the holiday as “a day on, not a day off.”

On its own, that didn’t really happen. So two years later, the late U.S. Sen. Harris Wofford, who was at the time the Pa. Secretary of Labor and had advised and marched alongside Dr. King, started a campaign to make it official. It would take until 1994, but working with Georgia Congressman John Lewis, Wofford got it done.

It’s now the nation’s only holiday that is also a day of service. And though it’s celebrated around the country, it’s basically headquartered in Philadelphia.

Sen. Harris died last year on MLK Day. His former state office director, Todd Bernstein, has been running the Greater Philadelphia MLK Day of Service in partnership with the nonprofit Global Citizen since its inception 25 years ago.

“We hope that the King Day of Service is not just about one day of volunteering, but an ongoing commitment,” Bernstein said in a phone interview. “Dr. King was a man of action 365 days of the year.”

Centered at Girard College, which has its own philanthropic history, the Philly area is home to the largest day of service in the country.

Last year, more than 150,000 volunteers dedicated themselves to nearly 2,000 projects locally, giving more than 320k volunteer hours and performing the equivalent of $8 million worth of community-changing work, according to Global Citizen.

This year’s theme focuses on voting rights, and African American women’s role in the suffragist movement. “They really played an important role,” Bernstein said, “yet, ironically, were excluded from the final results.”

The Greater Philadelphia MLK Day of Service is based at North Philly’s Girard College. The site itself is an accessible, full-scholarship boarding school for low-income families that began as a school for poor, orphaned or fatherless boys — but only white boys.

In 1965, Dr.  King joined protesters picketing the school to open admissions to students of color. “For this wall of this school is symbolic of a tragic evil in our nation, it is symbolic of a cancer in the body politic, which must be removed,” MLK said at the time. The school integrated in 1968, admitting four Black boys and two Asian boys.

On Monday, Global Citizen hosts its annual day of programming and community service kicking off at 9 a.m. with volunteer opportunities for students and a community job fair. The day continues with trainings for community members who want to be reading captains, a teach-in on combating anti-Semitism, wealth building workshops and other community-building seminars.

The organization also maintains a database of submitted MLK Day happenings around the region.

Pre-register by Jan. 18 for any of a long list of service projects happening at in partnership with the Unitarian Society of Germantown. Join neighborhood cleanups near Lingelbach Elementary, make soup and brownies for a local soup kitchen, or add your voice to a letter writing campaign on issues like economic justice, immigration and gun control.

The Northwest is home some of Philadelphians’ favorite nature spaces. Help maintain one these urban getaways on MLK Day by volunteering at Germantown’s Awbury Arboretum. Volunteers will work on projects including destroying spotted lanternfly nests and clearing invasive vines. The day culminates in reflection and a potluck soup lunch.

No construction experience is necessary for this hands-on service project. Working with Habitat for Humanity staff and AmeriCorps members, volunteers will help with drywall demolition and basement mold remediation. Bring a bag lunch and be prepared to suit up in the mandatory respirators and Tyvek outfits provided on site.

Maintain this historic property in another Northwest nature enclave at the Thomas Mansion in the Wissahickon Valley. Volunteers will work on cleanups around the property, its gardens and greenhouse.

Want to give back but don’t have the time for a full day of commitment? Germantown’s Johnson House Historic Site, in partnership with the 6300 Avenue Business Alliance, is collecting school supplies to giveaway at local schools. Swing by the location between 10 a.m. and 12 p.m. to drop off donations.

The Schuylkill Center for Environmental Education

There are 340 acres of fields, forests, ponds, and streams to maintain at this Roxborough-based urban environmental education center. On MLK Day, volunteers can participate in projects suitable for adults and children aimed at protecting the health of the habitat.

The African American Museum and others commemorate Dr. King

Philadelphia’s African American Museum is the first of its kind built by a major U.S. city. The museum is having a weekend’s worth of events starting Friday with a free evening poetry reading.

“The beauty of the annual MLK Day of Service is that each year’s activities and themes can be shaped in response to things topics and ideas being shared through local, national and world discourse,” said Ivan Henderson, VP of programming at AAMP.

The rest of the weekend, visitors can enjoy reduced $2 admission culminating in an celebration on Monday. Expect to see a spot-on Dr. King re-enactor, a museum-wide scavenger hunt for families and an afternoon memorial concert.

Annually, Eastern State Penitentiary honors the legacy of Dr. King with a full weekend of readings and discussions about the 1963 “Letter from Birmingham Jail.”  On MLK Monday, the jail-turned-museum will add civil rights-era musical performances and an MLK-based art project for children. Special events are free but admission to the museum is standard.

Remembering the incarcerated, cleanups and Black Power in North Philly

Historic Fair Hill is home to one of the first racially integrated burial grounds in Philadelphia. Prominent civil rights leaders like abolitionists Lucretia Mott and Robert Purvis are buried in the North Philadelphia cemetery, which was once owned by Quakers.

Take part in your chance to help Habitat for Humanity build 20 affordable housing units in North Philly’s Sharswood neighborhood. The organization, which is built on providing “strength, stability and self-reliance through shelter,” will have all the tools you need to get to work. No construction experience necessary.

When it comes to community service, there’s nothing like a good, old-fashioned neighborhood cleanup. Join the Philadelphia Recovery Community Center to clean about eight square blocks in North Philly, from Broad to 18th streets, along Broad Street between Glenwood and Lehigh avenues, and along 15th and 16th streets.

The recovery center will provide all the equipment and gear you need. End your day of service with a lunch and a movie, a Dr. King documentary screening, back at the community center.

Uhuru is a furniture reselling business that donates all of its profits to the African People’s Education and Defense Fund, a fund dedicated to protecting the human and civil rights of Black people.

Located at the corner of Broad and Parish streets, Uhuru’s annual MLK Day programming will include film screenings of MLK, the Black Power Movement and other civil rights documentaries, a flyering volunteer project and a pizza lunch.

Martin Luther King spent plenty of time behind bars throughout his prolific life as a civil rights leader. To honor his legacy, Mennonite Central Committee and Kingdom Builders Network will remember incarcerated citizens by featuring a panel about mass incarceration with returning citizens and criminal justice experts.

Later, volunteers will put together hygiene kits for people in prison. Volunteers should bring kit items including lotion, soap, toothpaste, deodorant and sanitary pads, or donate money before the event. For a full list of kit supplies or to donate, visit the Mennonite Central Committee MLK Day site.

Are you artistic? City Year, a tract of AmeriCorps working in schools throughout Philadelphia and around the country, is hosting two mural painting volunteer opportunities for MLK Day.

Volunteers will help complete two interior murals at John Welsh School in Kensington and nearby John F. Hartranft School. The projects are appropriate for helpers of all ages, and snacks will be provided. Make sure to wear clothes you don’t mind getting paint on, and go join community leaders, neighbors and City Year staff for a day of art and service.

While studying theology at the Chester, Pa. Crozer Theological Seminary between 1948 until 1952, MLK often took the quick jaunt to nearby West Philly to take classes at Penn. Three courses appear on King’s official transcript — Philosophy of History, Problems of Esthetics and a course on Kant.

There are also a variety of service opportunities on the holiday itself. Community members, students and staff volunteers will make toiletry kits for women, paint a children’s banner and make gifts for neighborhood homeless shelters. Penn is also partnering with Laura Sims Skatehouse, S. Weir Mitchell School, Andrew Hamilton School and Third Antioch Home School Center for four separate beautification projects. For a full list of happenings and locations head to their MLK Symposium website and events calendar.

Political town halls and protests across the city

Several social justice, political and advocacy groups are hosting protest actions in memory of the revolutionary advocacy of Dr. King.

From 12 to 1 p.m. at Uncle Bobbie’s in Germantown, the bookstore will host Pa. Sen. Art Haywood and activist coalition POWER for a townhall about raising the minimum wage statewide. Right now, minimum wage workers in Pa. make just $7.25 an hour. Advocates want to raise that rate to $15 and Philadelphia voters threw their support behind the idea in the last election. The city’s hands are tied on raising the wage because of state restrictions.

Volunteer in Philly: Run, garden, cook, build, and more ways to do good