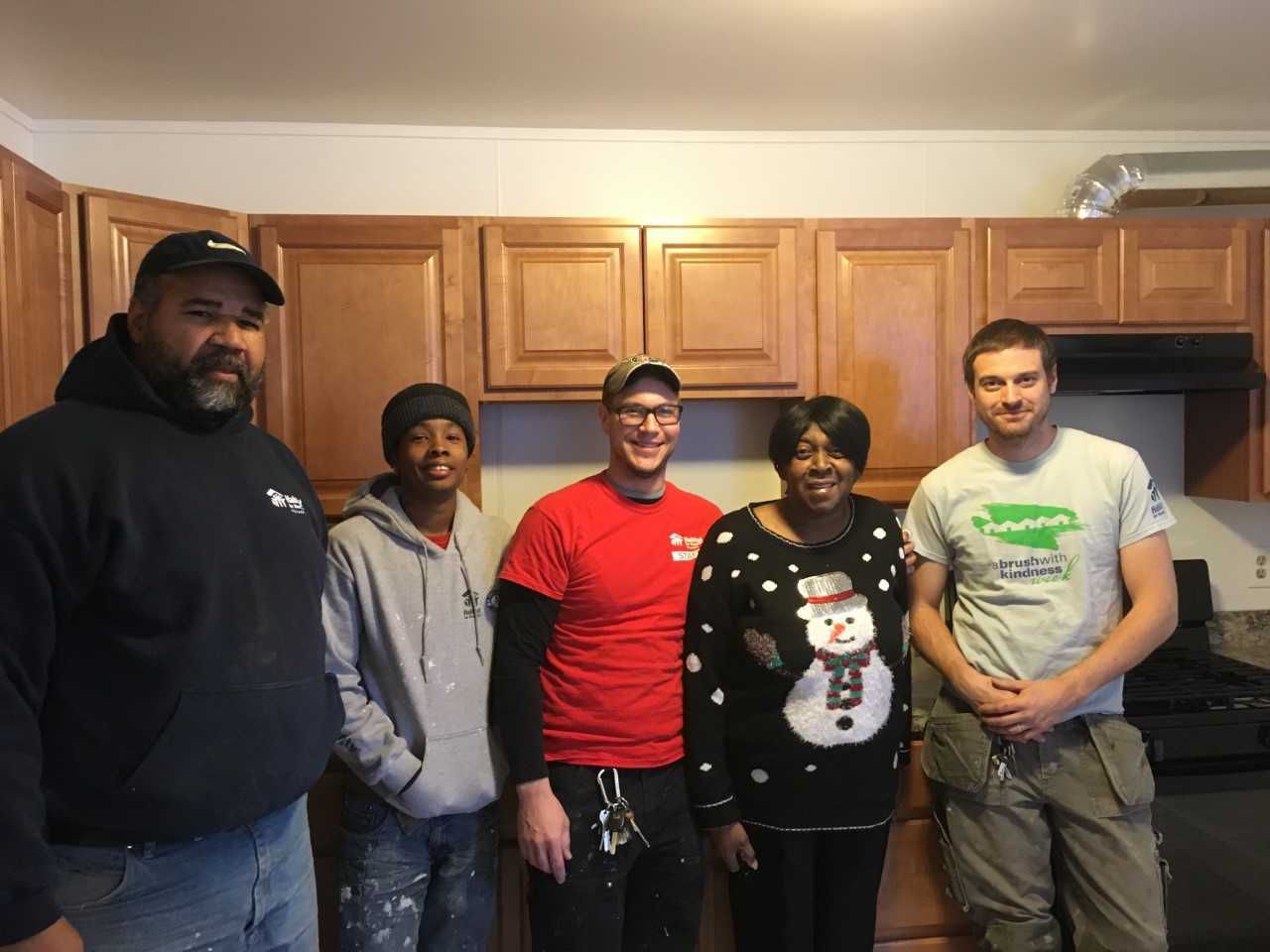 It’s been about six years since neighbors have smelled the chitterlings and hog maws wafting out the windows of Nikki Jones’ house on the the 4300 block of Wyalusing Avenue.

“I’ve always loved to cook,” said Jones, 75. “For my church, my neighbors and anyone. Pies, cakes, soul food, you name it. But you can’t make those things on a hot plate.”

That’s what Jones has been cooking on in recent years as her house has fallen into disrepair. She hasn’t had a working oven in the kitchen of the house that she bought for $1 back in 1982 for at least four years by her account. That was the byproduct of a tree that was uprooted and fell on her home after being struck by lightning.

The tree toppled into the second floor and destroyed her bathroom, and back downstairs in her beloved kitchen, where she spent most of her time, water damaged had rotted out the linoleum floor.

But any day now this home nightmare will be at an end, “hopefully before the new year,” Jones said, her voice giddy with an excitement that was previously absent. “This has been the type of experience that shows you there are real angels in this world.”

To Jones, those angels are the people at the Philadelphia branch of Habitat for Humanity. Earlier this year, Jones, who retired five years ago from working in day car, applied for Habitat’s Philadelphia Repair Program, which provides stabilizing and critical home repairs for struggling homeowners.

Almost one month ago, Jones, who like many citizens simply did not have the finances to maintain the upkeep on an aging home, found out her application had been approved. She opened the door to carpenter Will Lambrakos and his team. They have worked diligently and have restored her kitchen completely. She also has a new roof, a repaired front porch, and had electrical work done on her home.

The costs for all the work is approximately $25,000. Jones will be responsible for just 5 percent of the costs that she can pay in installments, and she won’t be charged for any of the labor or overhead costs.

As recently as 2014, Philadelphia had a homeownership rate of just over 52.2 percent, which is considered relatively high for a city of its size. However, the combination of low-income and aging residents living in older homes creates huge maintenance problems.

According to HFH, approximately 125,000 Philadelphia residents are facing the challenge of how to afford repairs on the maintenance of their homes.

Habitat for Humanity’s work in Philadelphia is currently focused in North Central Philadelphia as well as the Mantua, Belmont and Cathedral Park neighborhoods in West Philadelphia.

Lambrakos sounds as delighted to be able to do the work as Jones is to have it done.

“I see people in this position all the time,” Lambrakos said. “Amazing people. They’ve led great lives, been wonderful people and at some point they don’t have the resources to maintain their home.

“I see it all the time,” he added. “Good people living in homes with no heat, no kitchen. Water can find it’s way into a home and do an incredible amount of damage in a short time. We’re just doing our part to stabilize situations so that people can stay in their homes for as long as possible. When you’ve completed the work, I can’t describe what it’s like to see the joy on people’s faces.”

Jones, a former committee woman for the 6th Ward, 13th Division, plans to resume making enticing foods for friends and family soon. However, she is a diabetic now. That was problematic when she could not make healthy foods for her condition on her hot plate.

“I couldn’t make the foods I needed to eat when I didn’t have my kitchen, so my health has suffered,” Jones said. “But now I’m going to be able to make the foods that are healthy for my condition today. Like I said, there are so many blessings that are coming out of this.”