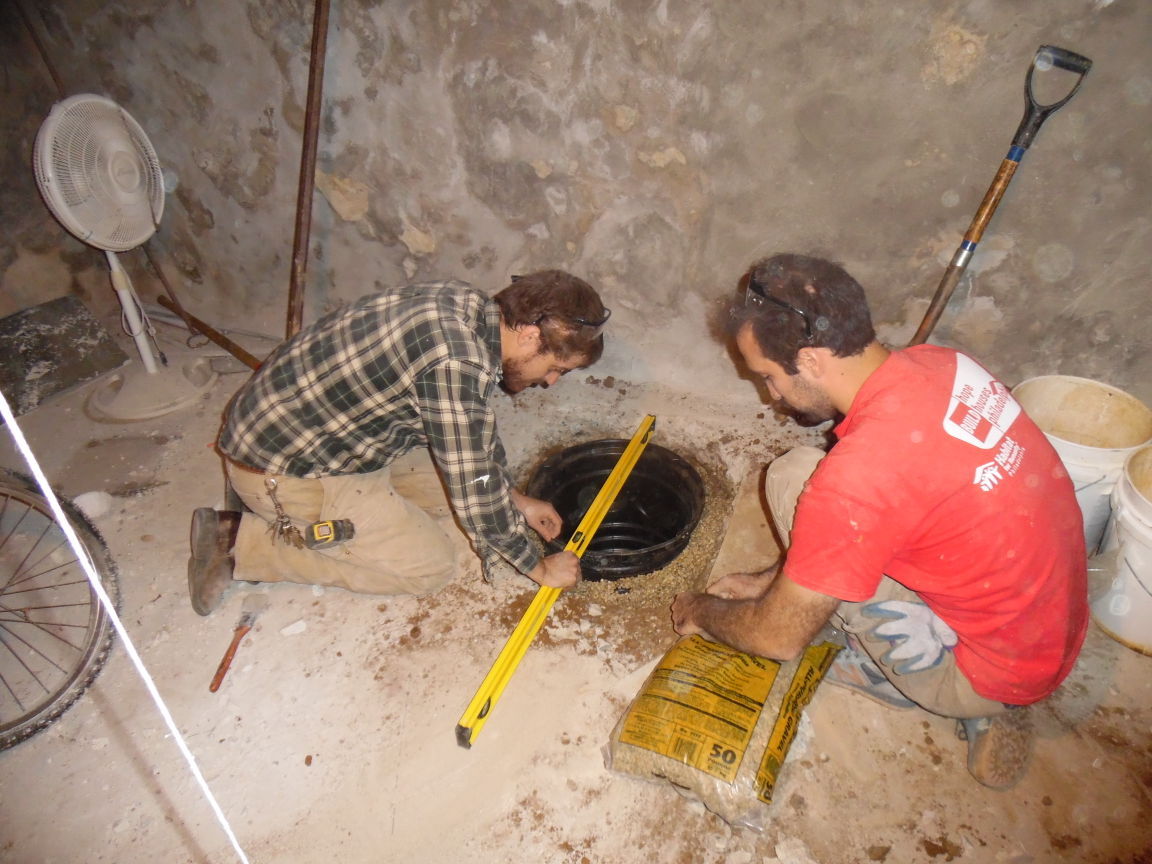 Habitat for Humanity Philadelphia workers installed a sump pump as part of home repairs for 18 residents in the Mantua section. — Tribune Photo by Nathaniel Lee

Residents in the Mantua section of West Philadelphia are receiving much needed help with home repairs and renovations thanks to Habitat for Humanity Philadelphia and the Philadelphia Local Initiative Support Corporation.

Habitat for Humanity Philadelphia has embarked on an extensive effort to help 18 low-income homeowners whose properties are in critical need of repairs.

Mary Hollis, one recipient of the repair help, is caring for a chronically ill daughter. She said that the time, resources and efforts to provide the necessary care prevented her from making repairs on her home.

“I truly needed all of this work. I could not have afforded to get it done on my own,” said Hollis, whose work includes a new roof, a rebuilt porch, basement windows and plumbing repairs.

With many areas of West Philadelphia undergoing gentrification, many current homeowners who want to remain in their communities find it difficult, if not impossible, to stay when facing major home repairs, insufficient incomes and escalating expenses.

Habitat and LISC lend a hand with repairs and other home improvements that would otherwise be beyond the financial ability of many receiving their aid.

“We know now that the need in West Philadelphia can be met and with significant new investment in the area, home repairs will help ensure at-risk homeowners are not displaced, can benefit from rising property values and stay healthy,” said LISC director Andrew Friskoff,

Timothy Esser-Haines of Habitat was on hand trimming windows, painting and digging a sump pump for one resident who frequently experienced flooding in her basement.

“Almost every Saturday we have volunteers coming,” said Esser-Haines, who grew up in Philadelphia.

The repair workforce consists of volunteers from participating organizations and concerned citizens, who register to volunteer online.

Bilqis Bint-Davis was doing final touches on some of the homes being restored on the 600 block of 37th Street.

Bint-Davis, now a Germantown resident, grew up not far from the West Philadelphia area of Mantua, where the homes were being restored. “It feels good to come back down here and give back to the neighborhood,” she said.

Bint-Davis also has a personal appreciation for the work that Habitat does.

“My daughter had acquired a home through Habitat and I saw the good job that they did and all of the volunteer work they did and how it benefited my family, and decided to join in myself,” she said. “A lot of people have a lot of complaints about blight and issues concerning the downfall of the neighborhoods so it feels good to come back, even if it’s just a little paint job or fixing a fence or something. I think everyone should.”

David Hilbert, who has worked for Habitat for two months, was hard at work digging a trench for a sump pump as part of his service for AmeriCorps as the Habitat intern this year.

Hilbert called the work a noble service and will be working at various sites throughout Philadelphia. He requested that his internship be with Habitat.

“I really like what Habitat does, the involvement of people who are receiving homes as well as the other volunteers, and I like their ethos,” he said.

A significant number of homes in the city are crumbling due to poor upkeep, Hilbert added.

“In addition to the socioeconomic problems, you can’t really address the latter if your house is falling apart,” he said. “So I feel that the work that Habitat does maintaining people’s homes or bringing them a new house really gives you a stable footing on solving the other things.”