Today, we are all #HomeTogether. Learn More

by Ryan Briggs, The Next Mayor 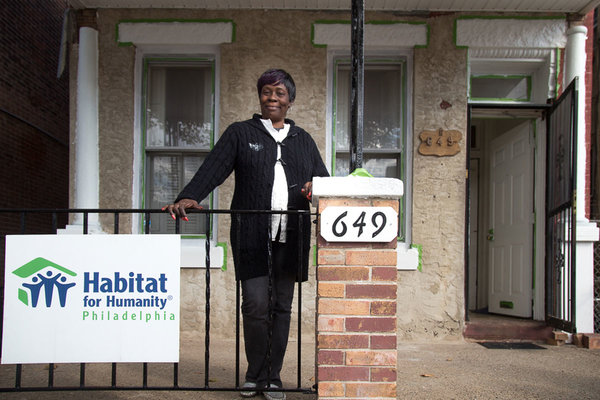 Homeowner Mary Hollis in front of her home after renovations have been completed. Photo by Wanda Thomas

Editor’s note: This story has been corrected. Figures showing what the Philadelphia Office of Housing and Community Development has spent in city funding have been updated.

MARY HOLLIS, a lifelong Mantua resident, watched in recent years as the home she bought three decades ago began to crumble.

Still, she resolved to stay in her house. Then again, Hollis has no choice.

Two years ago, her boyfriend needed spinal surgery, so Hollis went from working full to part time to care for him. Hollis was also working to put her younger daughter through college, but her daughter became sick, too.

Now Hollis works when she’s able for a home health-care service. She’d paid off the mortgage on her house, but as more of Hollis’ limited income and time went toward her loved ones, less went to home maintenance. Floorboards began to sag, the toilet start to leak, and she slept surrounded by pots and pans beneath an increasingly leaky roof.

“I just stopped going into the basement,” she said. “I lived like that for the past two years, maybe three.”

Hollis is a victim of Philadelphia’s silent affordable-housing crisis — low-income homeowners or renters chained to old, deteriorating housing stock. The “affordable-housing” programs that benefit homeowners like Hollis don’t receive nearly as much funding — or attention — as those that clear the way for brand-new housing across the city.

Some recent studies of low-income Philadelphia households find that could be misguided public policy.
Andrew Frishkoff, of nonprofit development financier LISC, describes Philadelphia’s affordable-housing crisis as a problem “of replacement rather than displacement,” saying that aging housing and a critical shortage of rental subsidies are exacerbating this phenomena.

“Rental assistance and preservation of existing homeownership stock are the two most important priorities for affordable housing in Philadelphia,” Frishkoff said.

The city’s Office of Community Housing and Development has spent between $14.6 million and $15.9 million in each of the last four years on housing preservation. Another $15.5 million is budgeted for the next fiscal year.

Contractors gave Hollis repair estimates in the tens of thousands of dollars. She looked into home-repair loans but worried about keeping up with the payments. And even if she wanted to move, Hollis was just as doubtful she could afford $700 or $800 a month to rent an apartment for her family.

“Sometimes I felt, well, not stuck, but just not moving forward,” Hollis said, fighting back tears, in a recent interview.

Then a “miracle” happened, she said. Her block was selected for a Habitat for Humanity rehab program last year. Now, volunteer work crews are finishing up costly roof and structural repairs — still splotched with paint. Hollis said she has pitched in, helping to paint part of her rebuilt porch. She and 17 other nearby homeowners selected for the program are being billed a fee of $350.

The happy ending for Hollis is that she gets to stop worrying about the basic need for shelter and get back to worrying about the complexities of caring for an adult daughter and partner. But in Philadelphia, there are lots of stories that begin like Hollis’ and most don’t end with “miracles.”

City leaders’ affordable-housing strategies rarely center around the $1.2 million in government funds and private donations that the Philadelphia branch of Habitat for Humanity will spend in 2015 to rehab 95 homes like Hollis’ — about $12,600 per house.

“The reality is that people are not being displaced in neighborhoods due to new development and market value driving up taxes,” said Carrie Rathmann, director of strategic partnerships at Habitat. “We are seeing people abandoning homes as they become uninhabitable due to financial inability to keep them intact.”

Research for a recent housing plan for Mantua and Powelton, developed by Frishkoff’s nonprofit development financier LISC, found that the majority of 365 low-income households ranked home repair as their top concern.

“We aren’t suffering the same kind of housing pressures as D.C., Boston or New York,” Frishkoff said. “We have pockets of that, but we have more places where, whether you’re a tenant or homeowner, you’re more at risk of losing your home from housing deterioration than price increases.”

A study released this month by Princeton University and the Federal Reserve Bank of Philadelphia on the impacts of gentrification found little concrete evidence of displacement taking place in the city.

“You’re producing a limited number of great-looking rowhouses to attract attention to neighborhoods and stimulate more development,” said John Kromer, a former city housing official and a professor at the University of Pennsylvania.

Kromer said these units do little for people like Hollis, who can barely afford rent.

Last year, Council President Darrell L. Clarke unveiled his signature affordable-housing vision, promising to deliver 2,000 new units of subsidized housing. Half of those units would be designated as rental housing. The rest were earmarked as 1,000 “affordable” homes with sale prices in the $180,000 to $230,000 range — nearly double the sale price of the average home in Philadelphia.

A spokeswoman for Clarke did not respond to a message seeking comment.