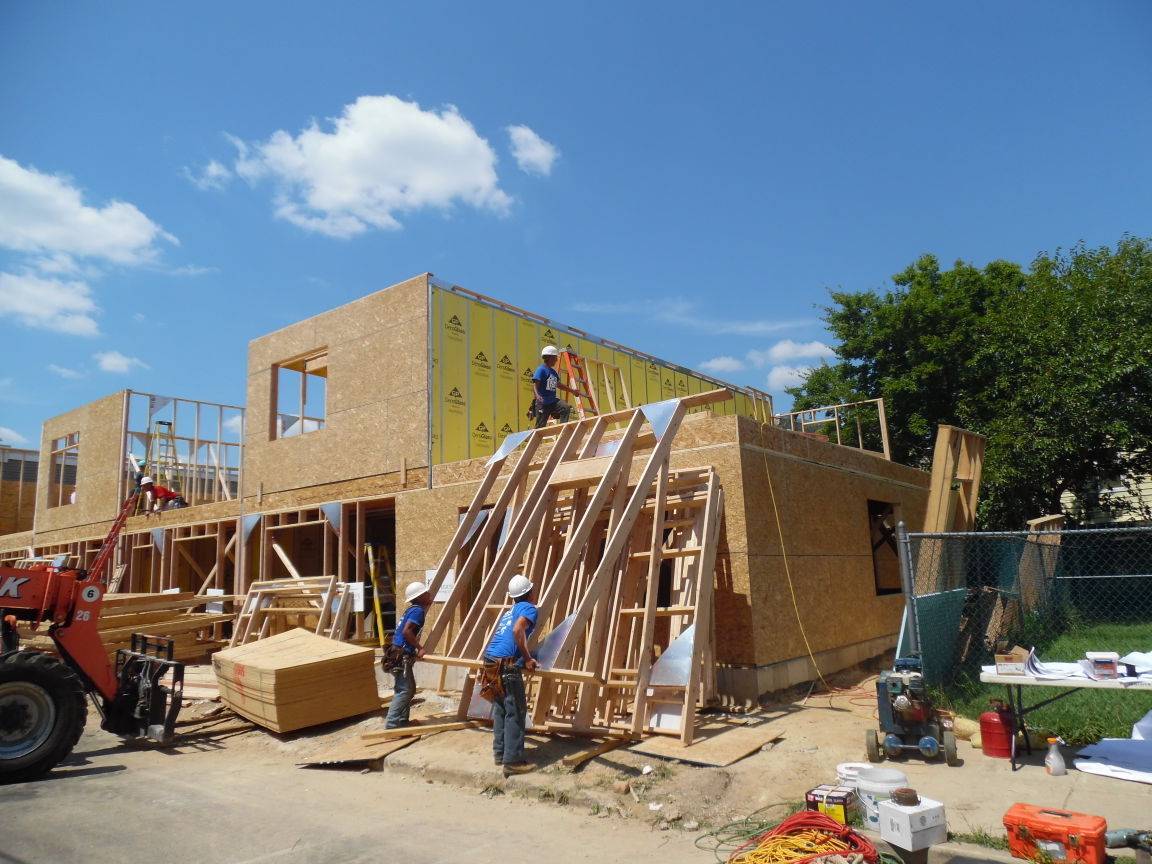 Volunteers join Habitat for Humanity Philadelphia to frame homes for five families on 19th and Turner Street in North Philadelphia. The work was completed in three days.

Five families will soon have new homes, thanks to volunteers and sponsors who joined with Habitat for Humanity Philadelphia and worked feverishly to frame houses in three days for low-income families at 19th and Turner streets in North Philadelphia.

The workers, volunteers who included the United Brotherhood of Carpenters, Carpenters Union Local 1073 and the Dale Corp., rose early in the morning and worked late into the afternoon to help Habitat frame the houses to reduce the time required to complete them.

Habitat Philadelphia works with low-income families to build new homes for those who otherwise could not obtain traditional mortgages and provides critical repairs for homeowners unable to make those repairs themselves.

“I’m always heartened to see what nonprofits, communities of faith, the labor industry and corporate groups can accomplish when we get together,” said Carrie Rathmann, director of strategic partnerships for Habitat.

“Five families’ lives will be forever transformed when they have safe and stable, affordable housing, and we really couldn’t do it without this complicated fabric of stakeholders.”

Before the work began, there were only blighted structures, said Rathmann. Not only will the homes improve the lives of the families who will inhabit them but also the neighborhood, which will have less blight.

The process of building sustainable homes for low-income families itself helps to unify and build communities as the five families who will occupy the homes also are required to provide 350 hours of what is called “sweat equity,” or actively participate in the building of the homes they will soon own.

As they did so they were joined by their future neighbors and others in the community who rolled up their sleeves and helped, creating a bond which participants said most likely will last a lifetime.

“They’ll get to know the neighbors through this process; two or three of the guys who live next door have been out volunteering with us, the firemen across the street have been helpful, so it’s really been helping to solidify this block that has been vacant for a long time,” Rathmann said.

Dennis Vechta of Dale Construction and Carpenters Union Local 1073 says that the work being done during the weekend helped put the construction of the homes two months ahead of schedule.

“We’re just trying to give people something they could not possibly have and Habitat for Humanity is making it happen,” Vechta said. “Dale has been doing a lot of rehab in the city, so we’re doing our part in making the city better.”

The team of more than 25 volunteer builders worked to complete the framing of these homes in just three days.

“The event is a tremendous boost for Habitat Philadelphia and will help us get these families into their homes sooner,” Monaghan said.

The new homeowners are expected to be able to begin moving into their homes by the holiday season in December.