Introducing the newest members of the Wilt Street Legacy Society

Two women in the city’s Olney neighborhood just made a commitment that will help Habitat for Humanity Philadelphia reach its vision of a city where everyone has a decent place to live.

Gretchen Dykstra and Eva Baker-Dykstra named Habitat Philadelphia in their will to become the most recent members of the Wilt Street Legacy Society, which recognizes those who have made planned gifts to the organization. Their generosity will leave a lasting impact on Habitat and the families we work alongside. 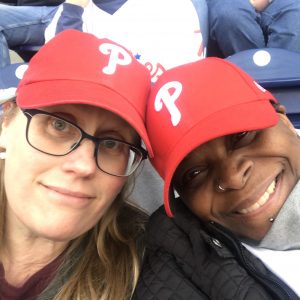 While the legacy of this donation will be felt for decades to come, it was a day nearly 30 years ago that set this moment in motion.

“I moved to Philadelphia in 1992 and was looking to make friends so I attended one of the building events,” said Gretchen. “I’m not very handy so my building career didn’t stick, but everyone was so welcoming and it’s a wonderful mission for an organization.”

Gretchen only volunteered on-site once, but Habitat’s work stayed with her.

“Home is so important to me,” she said. “I grew up in a very close family and this was a non-profit that I could instantly get behind.”

She continued to support Habitat over the years with contributions and then she and Eva moved to a monthly $25 gift. When they started to think about their estate plans and creating a will, they saw an opportunity to include Habitat and worked with the staff to ensure they had all the needed paperwork to bequeath their home and assets to the organization.

“I’m a recycler,” said Eva. “It doesn’t make sense to me to not use our home like this. If you want a house, it shouldn’t be an impossible dream.” She added that the process was easy and working with Habitat was seamless.

“I didn’t even realize that Habitat did this kind of thing,” said Gretchen. “The organization is so important to me and Eva and we want it to continue and be able to sustain its work.”

“Gretchen and Eva’s gift is a phenomenal example of how Habitat supporters can help sustain the organization for years to come,” said Senior Director of Institutional Advancement Kathryn Fernandez. “We are grateful to have them as part of the Habitat Family and know that their gift will help us continue to ensure more families have a home that is safe, warm, and dry.”

In addition to Gretchen and Eva’s planned gift, their contribution will be bolstered by an additional $25,000 to Habitat from the Davis Family Match, which seeks to secure more members of the Wilt Street Legacy Society.

As Habitat Philadelphia continues to build and repair more homes in our city, members of the Wilt Street Legacy Society have the opportunity to lay the foundation for future success.

The decision to support Habitat Philadelphia in their will ultimately came down to wanting to provide the comforts of home for future Philadelphians.

If you’re interested in joining Gretchen and Eva as members of the Wilt Street Legacy Society, or have already named Habitat Philadelphia in your estate plans, please contact Senior Director of Institutional Advancement Kathryn Fernandez at kathrynf@habitatphiladelphia.org.

“This is my little safe space. I can be who I am here, I can do what I want. You feel loved at home.”

“Home is where all the good stuff is.”