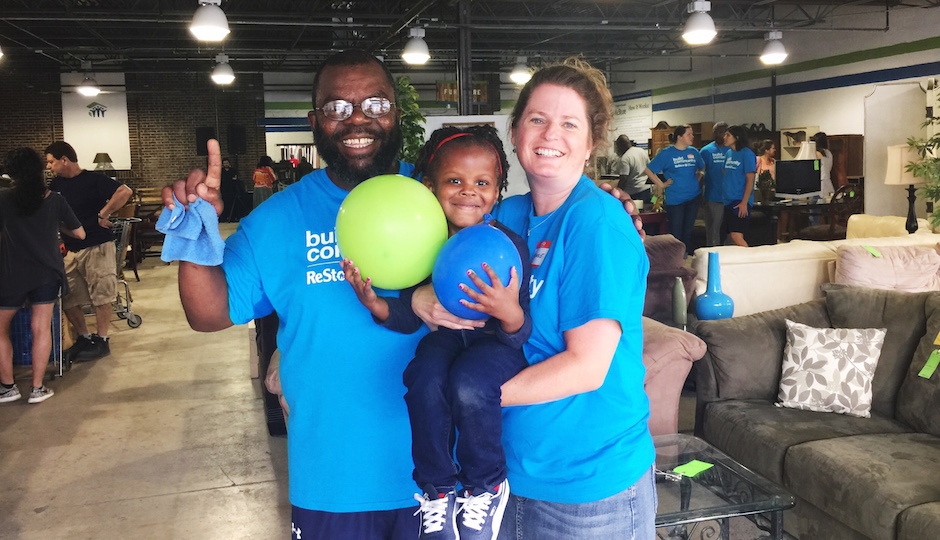 For store employees and future homeowners like Clifton Carter, the $1 million mark meant something more than just a financial achievement.

When Habitat for Humanity Philadelphia last year moved its ReStore, a nonprofit home improvement store and donation center, to new digs on Washington Avenue, the directors thought aiming for $750,000 in the first year might be too ambitious.

Within ten minutes of opening its doors to the public for shopping on its first anniversary today (June 23rd), the ReStore sold a dining table and a leather sofa. And little did shopper Victoria Wilson know she would be the customer to officially put the store over the million-dollar mark in its first year with these items.

The event kicked off with brief remarks from Habitat for Humanity Executive Director Frank Monaghan, future Habitat homeowner Clifton Carter, ReStore employee and Habitat homeowner Audreyelaine Coleman, and the lucky customer who was rewarded with a $100 gift certificate to the store.

The store sells new and gently used furniture, appliances, home goods, and building supplies, including items donated by higher-end furniture stores such as West Elm and Crate and Barrel as well as home improvement megastore chains like Home Depot. Habitat then uses all of the ReStore profits to build and repair homes for low-income Philadelphia families. The $1 million in sales over the past year has allowed the nonprofit to construct two homes, create seven jobs and redirect 900 tons of home goods toward homes instead of landfills.

For Carter, whose family has completed the required 350 hours of sweat equity and has been matched to purchase one of the homes currently under construction at Diamond Park in October, the event is a personal one.

When asked what he’s most looking forward to in his new home, Carter explains that he’s eager to catch his wife Deanna’s emotional reaction “when they cut the ribbon and give her the keys. I know that I’ve finally done something, and she could finally have something also.”

He also gestures towards his granddaughter, Sahbriya, who is running around the store with her hands grasped around a bouncing blue balloon. “This is our foundation for our future,” he says, his eyes watering with emotion. “When a kid has a home to go to, to feel safe and secure, to study properly, you open yourself to different ideas, you get hobbies and goals, you get a sense of what you want to accomplish and I want to teach her that it can be done.”

Having been part of the program for two years, Clifton highlights being part of a close-knit community as one of the most memorable experiences with the nonprofit.

The ReStore, open every week from Wednesday through Saturday, is often filled with locals like Janis Devlin looking for cheap finds. Devlin moved to the Rittenhouse Square area around the same time the ReStore opened last year and comes regularly to furnish her new home.

“It’s very green, to reuse something instead of throw away,” she says. “I kind of like older things rather than newer things anyway.”

In order for families to be eligible for the housing program, they need to meet three requirements as part of the initial application: express a need for housing, meet income guidelines (30 to 60 percent of the area median income) that demonstrate an ability to pay the zero-interest mortgage on their own, and partner with the program by completing 350 hours of sweat equity and attending required homebuyer workshops. To fulfill the sweat equity requirement, accepted applicants work on Habitat construction sites and volunteer at facilities like the ReStore.

While the $1 million was a mind-blowing achievement to celebrate for Associate Executive Director Corinne O’Connell, she says that the housing need in Philadelphia is “tremendous.” Habitat for Humanity in Philadelphia accepts families twice a year, but the organization still receives 800 calls per month from people looking to buy homes through the program, O’Connell says.

“It’s been a beautiful ride,” Clifton adds. “This would be impossible without people like Corinne and Frank and many of us, all the wonderful volunteers. It starts with a path forward … and it’s about upping each other.”

Giving Back to the Community