Habitat for Humanity Philadelphia, an affiliate of Habitat for Humanity International, plans to build 21 new affordable homes on 16th and Fontain Streets, which is an area neighborhood that is heavily populated with students. HFHP Executive Director, Frank Monaghan says that students drive rent rates up, which makes it hard for long-term or impoverished residents to stay in the area.

Volunteers at Habitat Philadelphia hope to fix this problem with Diamond Park.

The new development will be for residents who earn between thirty and sixty percent of the medium income. A family of four, in other words, will need to earn between $25,000-45,000 per year.

Prospective homeowners go through an application process to become eligible to purchase the home. Once approved, they are required to contribute over 350 volunteer hours to HFHP to cover the down payment for the house. The house is then sold with a zero interest mortgage.

Future homeowner Cliff Carter says that he spent his volunteer hours building houses for members of his own community.  “You’re helping to change lives,” Carter said, “…everything you do.”

Monaghan says that volunteering is a learning experience for everyone involved. “If you build your own house, you’re really going to have ownership of that. And you’re going to learn a lot of different traits.” Homeowners will know how to fix a window and leaking pipe, for example.

These traits are useful to homeowners even after they move in. “If something goes wrong, they can fix it themselves,” Monaghan added. 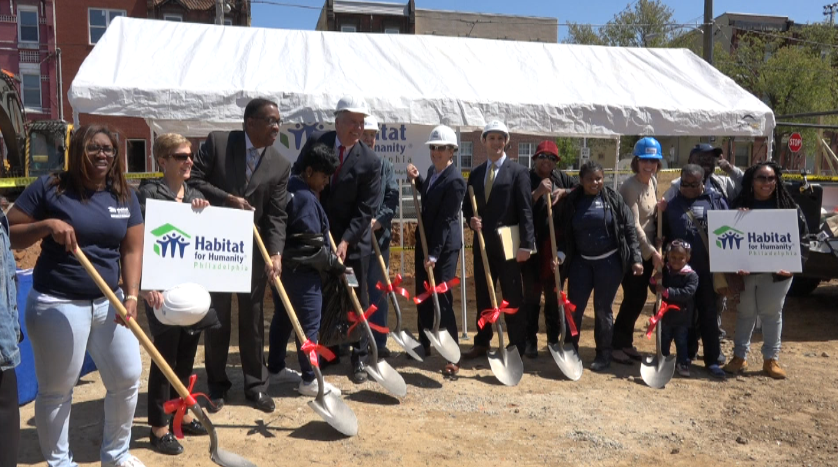 Carter says that Habitat for Humanity isn’t just changing lives, it’s changing Philadelphia. “I remember these neighborhoods back in the seventies. It was a pretty rough neighborhood, but I walk through here now and I see so much diversity as far as the cultures and that’s a beautiful thing. That’s what makes a neighborhood.”

Philadelphia City Council President, Darrell Clarke attended the groundbreaking and sees the value in the project. After thanking HFHP for their service, he stressed the importance of supporting the organization. “I remember a point in time when there was actually some debate as to whether or not we should give Habitat land for free to build new houses.  It was like the most ridiculous conversation in the world,” he said during the presentation.

1,000 general and industry volunteers will contribute over 24,000 hours of volunteer work to the project that is already under way. Staff member, Brian Lafferty says HFHP is “directly invested in this community and its members. We don’t want to just build houses and give them away to people, we want to build homes.”

Carter says that these homes are “good for anybody that wants to change their standards of living or basically change their life, period. Because when you have a house, things start to change.”

Diamond Park will be constructed in two phases. The first phase, or first twelve houses, will be completed next spring. Homeowners will begin to move in by May of 2017.

Artist rendering of Diamond Park on 16th and Fontain.